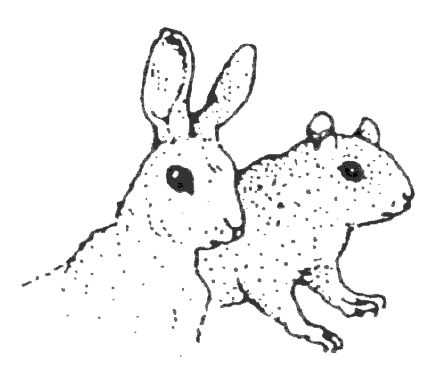 The Oak Terrace Nature Trail is a self-guided trail; there are 11 stops with numbered stakes along the approximately quarter mile long trail, corresponding to the numbered descriptions in this brochure. It takes about 30 minutes to complete the walk. lf you have any questions or want more detailed information about any of the stops, contact a staff member at the Nature Center.

We hope the trail will contribute to your understanding and enjoyment of this Natural Area Park. Please stay on the trail and do not disturb the plant or animal life. 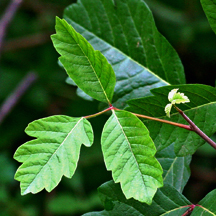 Poison Oak is one of the most common plants in the park. lt is easily recognized by its leaves, each of which is divided into three separate leaflets. (However, there are instances where the leaves divide into four or five leaflets. An example of such a mutation can be found on a plant farther down this trail.) Poison Oak plants growing in the shade usually have larger leaves than those growing in the open. The leaves are usually green, but may turn red or yellow, especially in the late summer or fall. The plant is deciduous and drops its leaves in winter. Both the leaves and the stems are coated with an oil that causes blistering and itching upon contact with human skin. Some individuals are more sensitive than others to its effects; animals are unaffected.

The Coast Live Oak tree provides food, homes, and physical requirements for a great many plants and animals in this area. Shade enables the moisture to stay longer, and along with the accumulation of fallen leaves and twigs, provides a moist habitat for plants like Poison Oak and Douglas Nightshade. Each oak leaf is a potential home for a small insect species, the Crown Whitefly. Pick a leaf off the ground and look for the tiny black and white specks. These seemingly insignificant insects are the main food source of the Bushtit, a small resident bird. Another example of dependency is found between the tree and small wasps called gall wasps. Their woody homes vary in appearance from large, tumor-like structures to small nodules resembling the beads of a necklace. Sometimes they are mistaken for seeds. When the adult female is ready to reproduce, she injects her eggs into the twigs or leaves of the tree. The hatchling larvae secrete a chemical that causes the plant tissues to swell into a comfortable home for the larval wasps. These larvae grow by eating part of their home. After changing into adults they chew their way out. The holes in the gall are evidence of their exit.

The acorn is still another source of food, being harvested from the trees by Mule Deer, California Ground Squirrels, Acorn Woodpeckers, Scrub Jays, Dusky-footed Wood Rats, and Band-tailed Pigeons. 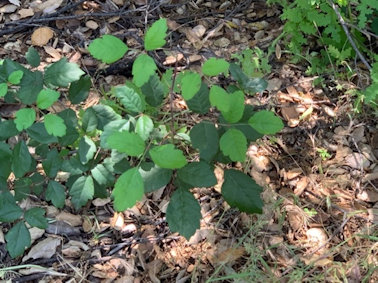 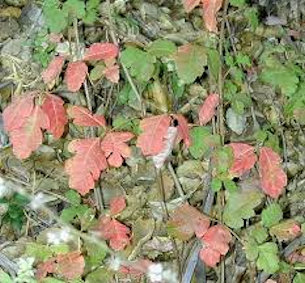 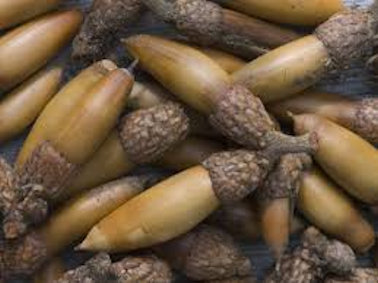 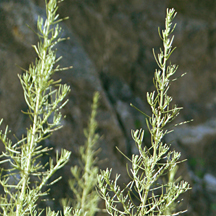 Directly ahead is California Sagebrush. ln the spring, this plant is covered with small, elongated green leaves that give off a distinctive odor when rubbed. In the summer, the leaves turn brown. Two mammals frequently seen on this portion of the trail are the California Ground Squirrel and the Audubon’s Cottontail. Both illustrate adaptive coloration. The squirrel lives in subterranean tunnels; the cottontail lives in bushes. The earthy colors of these two small mammals helps them avoid detection in rocky, sandy places where there is a good supply of grass to eat.

The indigenous plants exhibit many different adaptations to Eaton Canyon’s hot, dry, desert-like climate. Leaf size, color, and texture are among the many types of adaptations found here.

White sage, located behind and to the right of the post, features some of these adaptations. Both the white, hairy covering and the oily substance on the leaves are ways the plant has become adapted to conserve moisture during the long, hot summer.

Another striking adaptation can be found in the leaf modifications of the Scalebroom, which is located to the left of the post. The new growth of the plant appears as normal leafage. As time goes on, the leaves transform into scale-like structures that hug the stems of the plant. The scales have less surface area than leaves and cut down on the water loss, or transpiration, of the plant. 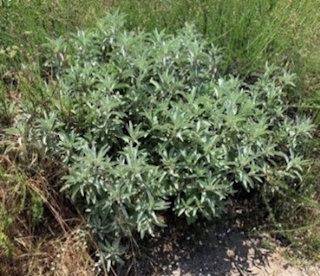 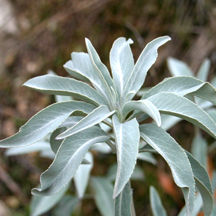 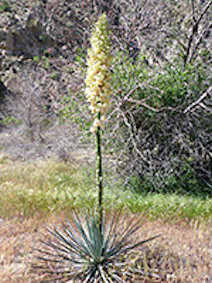 The rock mass of the San Gabriel Mountains is weak in structure because of its great age and because it has been repeatedly fractured by the forces produced by the earth’s movement along its fault lines. Running water, in the form of streams and rivers, has sculpted the deep gorges and steep slopes. The processes of erosion have formed the alluvium, or water-transported rock and sand, which is the soil base for the plants of the park. Alluvium is coarsely textured and well drained. Rainwater percolates through it rapidly, leaving the soil dry shortly after a storm. The dryness of the sandy soil is a major limiting factor for the plants of the Park. Only xeric, or dr0ught—resistant, species survive both the dry soil and the long, hot, dry summers.

The large cliff you see here, called a terrace, was cut by floodwaters. Here is proof of the periodic, violent, torrential rainstorms that take place in the San Gabriel Mountains. Notice that the terrace bank is facing east and therefore gets a full dose of radiation from the sun. Plants that are well adapted to heat and drought live here, namely White Sage, Black Sage, Laurel Sumac, Coffeeberry, and Whipple Yucca.

On the mountain ridges above can be seen the Henninger Flats Forestry Plantation and the Mt. Wilson Toll Road zig-zagging up to it. This road leads from the north end of the Park up to Henninger Flats and beyond up to Mt. Wilson. Flora on this mountainside is an example of the Chaparral Plant Community. Dominant plants of the chaparral include Chamise, Laurel Sumac, Whipple Yucca, and Coffeeberry.

Wildfires play an important role in maintenance of the chaparral. Immediately following a fire, most of the trees and shrubs may all appear to have been killed, but parts may still be alive. Within weeks, new foliage sprouts from basal root burls. Heat from the fire also cracks open hard seed coatings of many chaparral plants, allowing the seeds to germinate in a bed of nutrient-rich ashes. Each year, when the fall rains come, annual plants grow in profusion, holding the soil in place and providing abundant food for wildlife. Within a decade the burned slopes will look as they did prior to the tire. 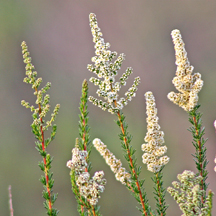 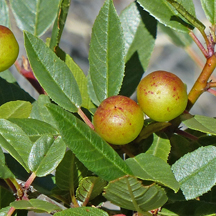 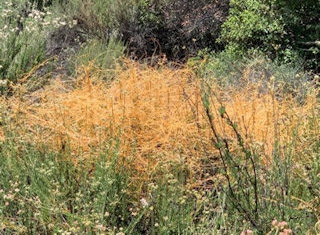 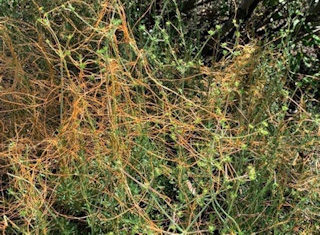 Growing on many of the chaparral plants on the terrace is a stringy, orange plant known as Dodder, or Witch’s Hair. This unique parasite lacks chlorophyll, which is necessary for making food. Its wiry, orange stems coil around the stems of other plants. It sends its roots into the stems of the host plant, from which it draws its nutrients. In this parasitic relationship the host plant is seldom killed. Witch’s Hair is most luxuriant in spring and summer when its small white flowers may be observed.

Surrounding the post is Prickly Pear Cactus. In the summer, this plant produces yellow-orange flowers, which are soon followed by purple fruits known as prickly pears. The white, cottony substance seen on many of the pads is actually a protective covering produced by the female cochineal insects living on the pads. The female cochineal produces a chemical before she lays her eggs, and this red-purple chemical is used as a dye in many foods and cosmetics.

Unlike the evergreen Coast Live Oak, the Western Sycamore is a deciduous tree. As autumn approaches, it drops its leaves and becomes dormant in order to survive the oncoming winter months. Sycamores have broad, soft leaves and transpire (release water into the air) large quantities of water. Therefore, they are confined to canyon and river bottoms where their extensive root systems can reach the considerable amounts of water that percolate under the ground surface. 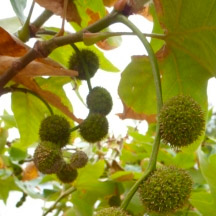 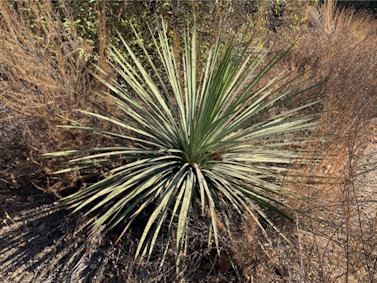 Take a close look at the thin, tough leaves of the Whipple Yucca. Each leaf comes to a sharp, needle-like point. The pIant’s array of needle-tipped leaves is used by the plant to protect its bulbous root from such animals as the Black-tailed Mule Deer, the Dusky-footed Wood Rat, and the Audubon’s Cottontail. The root contains much of the food and water needed by the plant to survive the hot, dry climate of the chaparral plant community.

The yucca lives for about 8 to 12 years and then comes to a dramatic end. With a final burst of energy the plant sends up a flower stalk, which expands to its full height in about two weeks! The height of the flower stalk can exceed 12 feet. As the top of the flower stalk is blooming, the lower half is already forming the fruit or seed pods. By the time all of the seed pods are formed, the yucca is dead. The Yucca Moth pollinates the flowers and its larvae feed on some of the seeds. Each species depends on the other for its survival, illustrating the ecological concept of mutualism.

Beneath the Coast Live Oak and Western Sycamore trees there is a plant world quite unlike that found in hot, sunny places. The trees provide an abundance of shade, which allows lower temperatures and higher humidity. The plants growing in the shaded areas have broad, soft leaves and require more moisture because their transpiration (water evaporation) rates are higher. The undergrowth of plants you see here is a mixture of Douglas Nightshade, Poison Oak, and Foothill Gooseberry. 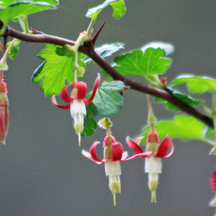 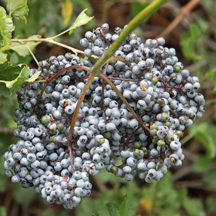 The Elderberry shrub bears a head of creamy white flowers in the spring, and the fruits ripen to clusters of bluish-bIack berries in summer and fall. The berries are a food source for wildlife, and are delicious as a condiment for people in jellies, jams, wines, and as a fresh fruit. This shrub is an example of the plants that recover from fire by re-sprouting from the root crown.